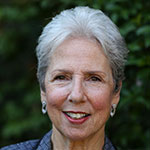 Born to an Italian immigrant father and Jewish American mother, Charon was raised in El Sereno, a predominantly Mexican-, Italian-, and Anglo American working class neighborhood northeast of downtown Los Angeles. In 1960, Charon began her studies at Cal State L.A. as a business major while working part-time on campus. She became involved in community activism after her brother died in Vietnam. Charon received a joint master’s degree in pan-African Studies and administration and, in 1977, became Cal State L.A.’s affirmative action director. During her 17-year tenure, D’Aiello enacted policies and created innovative programs that resulted in the hiring of more ethnic minority and female faculty and administrators. Charon, along with husband David, established the Ochari D’Aiello Scholarship in honor of their 16-year-old son, who was tragically murdered in 1992. The D’Aiello-Sandoval family remains active at Cal State L.A., and recently made a historic gift to the university.